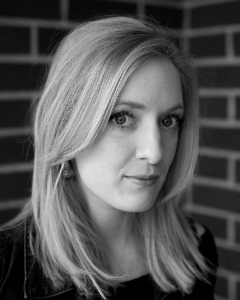 Amy Holwerda lives and writes in Chicago, Illinois. Her work has been noted in Best American Essays (2013), and has appeared in The Collagist, Hobart, Flash International, The Sycamore Review, Quick Fiction, and elsewhere.
Website

Saul sat almost peacefully staring at the aquarium in the waiting room, watching the neon fish cut their way through the water. When the blonde nurse entered the room, Saul wanted to tell her to sit down. Pour herself a cup of coffee. He knew what she was going to say, and that he wouldn’t be able to stop her. He swallowed hard and nodded.

Saul didn’t want to look the girl in the eyes. She was young. Too young, he thought, to be dealing with death.

The nurse’s bright pink fingernails clicked against her clipboard as she flipped through pages. “We called your daughter. She should be here in an hour. Would you like to sit with your wife while you wait?” The thought of sitting in the room with Henrietta’s dead body made Saul’s eyes glaze over. A heavy weight pooled in his chest. “Like the doctor said, she went peacefully,” the nurse said. Saul wondered why she was smiling. “In her sleep. There wasn’t any pain.”

The clipboard sagged in the nurse’s hands. She stopped at the doorway. “I’m so sorry for your loss,” she said, but the words sounded like tin.

When the nurse was gone, Saul sat and listened to the clock ticking away seconds behind him. He shouldn’t have snapped at her, he thought. it wasn’t her fault Henrietta died. But he didn’t want to face that room, didn’t want to see her lying beneath a white sheet. He would wait until his daughter, Emily, arrived. He rose from the chair and shuffled out to the hallway. A group of nurses huddled around a desk, whispering. One pointed in his direction.

From the Contributor Commentary

My husband’s grandfather provided the first inspiration for “Gardenia.” I visited him in Coalville, England a few years before his death and toured the land where he had grown up. He could no longer remember who was prime minister, or whether he had eaten lunch that day, but as we pushed his wheelchair down dirt paths near the woods, he remembered exactly which berries were edible or poisonous, and which wildflowers
could be stewed for homemade spirits. There, the natural landscape was marred by a massive, abandoned limestone quarry. A hole large enough to expose different layers of the earth. It seemed poignant, even then, that a man losing his memory should note the hollowed out earth.

As often happens in fiction, the second moment of inspiration came during random conversation at a dinner party. A man told the story of his family’s decision to leave their village in India when he was an infant. The man grew up in Canada and didn’t return to India until adulthood, guided by that strange pull to connect to one’s long abandoned cultural heritage. He visited the village where he had been born, and to his surprise, felt no emotional connection to the place. However, on the packed train car back to Mumbai, the strong smells of travel overwhelmed him, and he found himself inexplicably weeping. Later, his mother told him how she had clutched him as an infant and wept during the same train journey forty-years earlier. We all have these sensory memories imprinted on our subconscious and know how the sudden smell of clove cigarettes or musty book pages can jolt us into sudden awareness, even when the memory cannot be immediately identified.