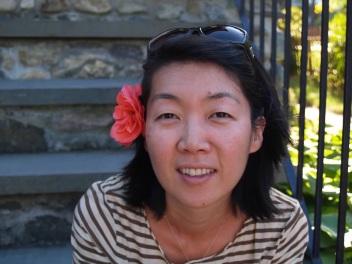 Caroline Kim was born in Busan, South Korea, but moved to America at a young age. Her poetry and fiction have appeared or are forthcoming in Manoa, The Michigan Quarterly Review, Meridian, Jellyfish Review, Faultline, The Hunger, Five on the Fifth, Pidgeonholes, and elsewhere. She has an MFA from the University of Michigan in poetry, where she won a Hopwood Award, and was a Michener Fellow at the University of Texas/Michener Center. She lives with her family in northern California.

Excerpt from “The Prince of Mournful Thoughts”

“Run!” the Prince shouted. But the poor eunuch remained standing there, unsure what to do, and was taken completely by surprise when the Prince threw his dagger at him, hitting him in the upper arm. The eunuch shouted and grabbed the offended limb, blood dampening his fingers. Without thinking any more about the matter, he turned and ran away. He fled to the courtyard, the Prince whooping behind him, shouting at his guards to step aside. He had a spear in his hand and chased the eunuch through his gardens, finally catchinOne morning after the King imitated the Prince stuttering at a morning audience with the ministers, the Prince came home shouting for his horse. He played war all that afternoon with several dozen of his royal guard, drawing blood and bruising without seriously hurting anyone. He began drinking as soon as he went back indoors, sitting in his private chamber, alone with his mournful thoughts. By the time a eunuch appeared with his nightly snack of ddukboki and red bean cakes, he was pacing the room and talking aloud. He had opened a chest of weapons he kept in his room, was fingering the inlaid pearl on his favorite sword, testing the curved tip of the blade.

He told the eunuch he would count to ten and then he would chase him down like a boar in the woods. “Excuse me, your Majesty?” said the eunuch, lifting his head in surprise.

g him near the back wall. He took his time, running him back and forth like a rabbit, before he finally ran toward the eunuch, screaming, his spear raised high. He stabbed him in the abdomen. Then, looking completely crazed, he took out a knife and hacked at the eunuch’s neck until it was separated from his body. He stuck it on his spear and raised it high.

Even though the story of Prince Sado is known to most Koreans, I was ignorant of this important historical event because I left Korea before I was old enough to attend school. I moved to America during the time when immigrants tried to fit in by leaving their home countries behind, linguistically, historically, and culturally. My parents encouraged me to speak English rather than Korean out of a misguided notion that it would make my assimilation easier as if nationality was a zero sum game. I could be either Korean or American, but not both. Because of this, I only learned about the story of Prince Sado as an adult when I began exploring my identity. Every country has its own distinct culture and personality. I knew I was Korean but I had no idea what that meant because I was completely unfamiliar with the place itself. How could I call myself Korean if I had no idea what Korea was like, how it had developed, what the people most cared about, or what the nation thought of itself? If you don’t know where you come from, how do you know who you are?

I’ve spent a great deal of my adulthood trying to answer these questions. I studied Korean, learning to read and write at a grade-school level, traveled to Korea, and read many books on the history and culture of Korea along with as many translated novels I could find. I was rewarded in many ways by my research.